A convenient way of representing geomagnetic fields is to expand the scalar magnetic potential into spherical or ellipsoidal harmonic functions. Such a model can then be evaluated at any desired location to provide the magnetic field vector, its direction, or the anomaly of the total intensity of the field. The NGDC-720 model provides such an expansion for the crustal field from ellipsoidal harmonic degree 16 to 719, corresponding to the waveband of 2500 km to 56 km. In order to be compatible with standard geomagnetic software, the model is distributed as corresponding spherical harmonic Gauss coefficients to degree and order 740 in the usual Schmidt semi-normalization. It has an angular wavelength of about 30 arc minutes, corresponding to 15 arc minute model resolution. 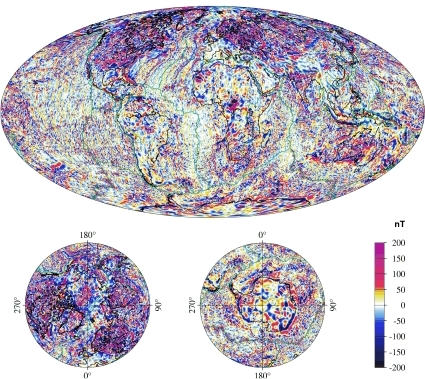 Fig.1: (click to enlarge) Vertical component of the crustal magnetic field at the earth surface as given by NGDC-720 after applying a Hanning filter to avoid ringing due to the sharp cut-off at degree 720.

The NGDC-720 model was compiled from satellite, marine, aeromagnetic and ground magnetic surveys (see our acknowledgement of data providers and collaborators). First, the aeromagnetic and marine magnetic data were combined to a common grid, EMAG2. Then the ellipsoidal harmonic coefficients of the magnetic potential were estimated in a least squares inversion. Since the long wavelength field is more reliably determined by satellite, the wavelengths larger than 330 km were finally replaced with the CHAMP satellite crustal field model MF6.