Movement of electrically conducting sea water through the geomagnetic field induces electric fields, currents and secondary magnetic fields (Sanford, 1971). It has long been speculated that tsunamis produce measurable perturbations in the magnetic field (Larsen, 1971; Tyler, 2005). Recent deployments of highly accurate magnetometers and the exceptionally deep solar minimum provided ideal conditions to identify these small signals for the tsunami resulting from the strong Chilean earthquake on February 27, 2010. The magnetic observatory measurements on Easter Island, 3500 km west of the epicenter, measured a periodic signal of 1 nT, coincident in time with recordings from the local tide gauge. The amplitude of this signal is consistent with the sea level variation caused by the tsunami in the open ocean near Easter Island. 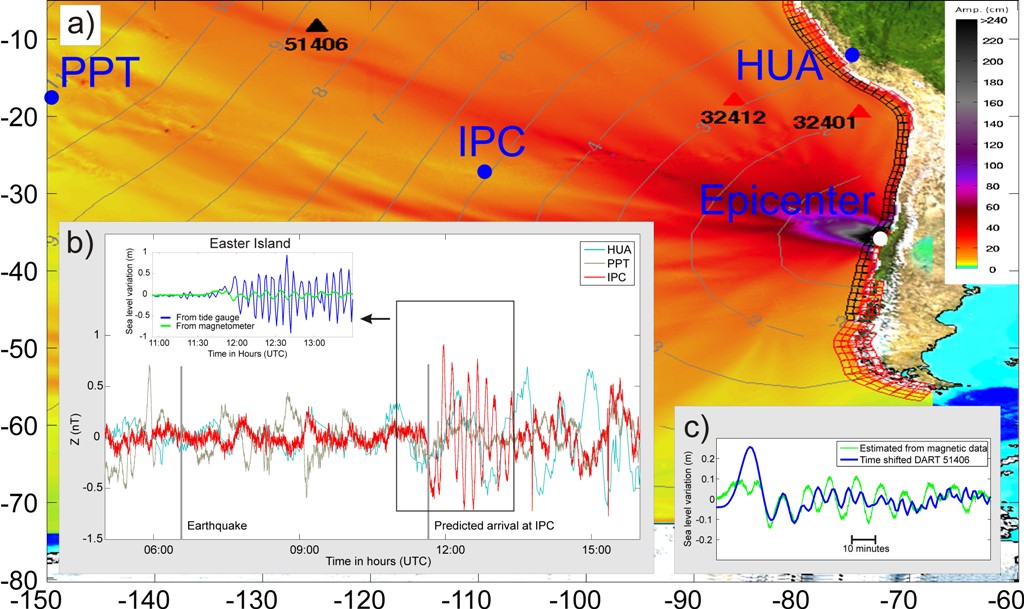 The recent magnitude 8.8 earthquake off the Chilean coast (February 27, 2010 at 06:34:14 UTC 35.846°S, 72.719°W) produced a moderate tsunami that traversed the Pacific Ocean westward (see the Figure). Exceptionally quiet magnetic conditions on this day (the planetary index for the magnetic disturbances from sources external to Earth was lowest in its scale during 0:00-15.00 UTC) provided a unique opportunity to verify the hypothesis that tsunamis generate measurable magnetic fields. The newly-constructed Easter Island observatory (code IPM) is located about 3500 km to the west of the epicenter. Further west is Pamatai (PPT) on Tahiti, while the Huancayo observatory (HUA) is situated north of the event in Peru. At the time of the Chilean earthquake, PPT and IPM were recording at a sampling rate of 1 second and HUA at 1 minute. IPM shows a periodic signal of 1 nT in the vertical component (Z) starting at 11:35 UTC. The other two observatories do not show concurrent variations, indicating a local origin of the signal. Commencement of the signal at IPM is coincident with the arrival time of the tsunami predicted by the U. S. National Oceanic and Atmospheric Administration (NOAA) Tsunami Research Center. Further west, at 7000 km distance from the epicenter, the tsunami magnetic signal at PPT (not shown) is not easily distinguishable from the background at the expected tsunami arrival time (17:30 UTC). This is to be expected since the tsunami wave height recorded by tide gauge near PPT is one fifth of that recorded near IPM.

The sea level variation due to tsunami around Easter Island can be inferred (Tyler, 2005) from the product of the tsunami-generated magnetic signal (±1 nT) and the average depth of the water column (3000 m in a 2° x 2° area), divided by the vertical component of the ambient magnetic field (19000 nT). Inferred amplitudes of 15 cm are consistent with the wave height predicted from the Method of Splitting Tsunami (MOST, by the NOAA Tsunami Research Center ) model and with bottom pressure variations seen by NOAA’s Deep-ocean Assessment and Reporting of Tsunami (DART) buoy 51406, 2650 km north-west of Easter Island. A more accurate prediction of sea-level variation from the magnetic field observations requires numerical solution of the electromagnetic induction equation for a tsunami flow model. Recordings of the tide gauge at Easter Island are displayed together with the magnetometer-derived sea level variation in the inset. The tide gauge exhibits the first major crest at 11:50 UTC, 15 minutes after the arrival of the tsunami and commencement of magnetic signals, due to its location on the western coast, in the shadow of the Island. It records higher amplitudes and frequencies, typical for the variation and resonances of a tsunami in shallow water. In contrast, the magnetically derived sea level variation is less affected by local bathymetry and is therefore more consistent with the waveform in the deep ocean.

Magnetic measurements are sensitive to motion in the deep ocean and therefore provide valuable information about sea level variation. The tsunami magnetic signals may be used one day in a monitoring system. A recent study (Manoj et al., 2010) found that tsunamis could also induce observable electric potentials in deep sea cables. In both cases, however, magnetospheric disturbances could limit the practical utility of tsunami electromagnetic monitoring to periods of low solar activity. An immediate application is to use the magnetic inferred amplitude and wave characteristics to understand the tsunami progress in the vicinity.

Using a forward predction algorithm along with a realistic tsunami flow model, we are currently modeling this phenomenon.

The geomagnetic data used in this study are from observatories operated by the Bureau Central de Magnétisme Terrestre, France (IPM and PPT,), the Direccion Meteorologica de Chile (IPM) and the Instituto Geofisico del Peru, Peru (HUA). The DART data are obtained from NOAA's National Data Buoy Center for DART data. The base-map for the figure is from NOAA's Tsunami Research Center. The tide gauge data at Easter Islandis provided by the Universityof Hawaii Sea Level Center.